Cat Lady: Stereotypes Debunked + Which Iconic Cat Person Are You? 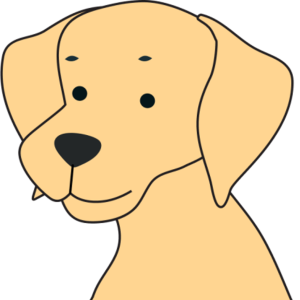 “Cat ladies” have long had a bad rap on the pet-owning spectrum.

Contrary to these popular beliefs, research consistently debunks the downsides of these stereotypes. In fact, the benefits of being a cat owner are aplenty, with research showing that cats positively benefit our well-being and even help us cope with everyday life.

It’s for these reasons that modern-day cat ladies, lovers, and owners are taking back the trope more than ever, from celebrities unabashedly flaunting their felines to cat lovers attending the annual CatCon event and also celebrating National Cat Lady Day.

Ahead of the aforementioned day, which takes place on April 19, we’re diving into the origin of the term cat lady, how it’s evolved, and some iconic cat ladies in modern-day history who are embracing the moniker.

The Anatomy Of A Cat Lady 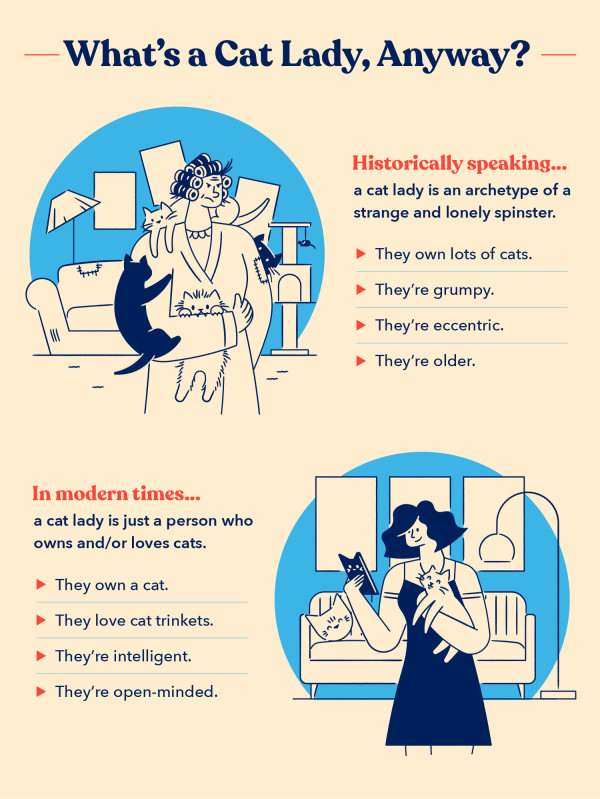 Historically, a cat lady is considered an archetype or fictional character, depicted as a middle-aged or elderly woman with lots of cats.  They might have a figurative chip — or even a literal cat — on their shoulder, and they prioritize feline friendships over those of other humans.

The term is usually synonymous with a spinster, meaning someone who’s never married and usually lonely. It’s a negative connotation that was painted even in the earliest of cat ladies. Consider witches and their black cats and the Old Maid card game illustrated with a woman and cat. All of this adds up to the meaning and origin of a “crazy cat lady.”

In our modern age, a cat lady is actually just a person who adores and appreciates cats, whether they own a whole litter of them or not. The cat lover doesn’t even have to identify as a lady to embrace the term “cat lady.”

However, it is often the case that women, especially older women, don’t choose the cat life but the cat life chooses them. Studies show that generally cats like women more, and other research provides that cats have better relationships with older women.

What Does It Mean To Be a Cat Person?

If you love cats, throw yourself a paw-ty! You can consider yourself a cat lady. Still, we recognize some pet owners might not be as cozy to the term, given the stereotypes.

So, what exactly does a cat lady look like? To take out any guesswork, we’re sharing some entirely unscientific signs that you may have reached “cat lady” status:

Of course, there are still a few commonly held cat lady traits and stereotypes that you might channel, too.

For the modern-day cat lady, being a cat person can come with some pretty harsh stereotypes, most attached to the meaning of crazy cat lady.

Here, we’re breaking down some of the common traits associated with being a cat lady, including research that proves they’re debunked or that they’re worthy of being embraced.

As “crazy” as it may sound, there were once some science-backed theories around cats making people eccentric. They all point to toxoplasmosis, an infection caused by a parasite found in cat feces that’s associated with mental and behavioral syndromes in humans. Researchers from University College London have since debunked this, and one study even posited that cat owners, compared to non-pet owners, have better psychological health. Still, Hollywood continues to run with the stereotype by writing entertaining “crazy cat lady” characters that speak pure gibberish.

Fictional cat ladies have often been portrayed as being detached from others and even celibate, but we’ve found only one report that mildly nods toward this “lonely” stereotype: Cat owners are apparently one-third more likely to live alone than dog owners. And we think that’s not something to frown upon, because are you really lonely if you prefer being alone? We think not, and we prefer the term independent for cat persons.

Cat People Have Lots of Cats

Another characteristic of cat ladies is that they have a lot of cats, so much so one might consider them a hoarder of cats. In fact, animal hoarding is a mental disorder and isn’t a term to be toyed with. Even as some studies show that women are more likely to be susceptible to this, we found no research confirming that every person who identifies as a cat lady owns an unmanageable amount of cats.

In comparing dog people and cat people, one University of Texas study did find that people who identify as cat lovers are 12% more neurotic than people who identify as dog lovers. Hey, it never hurts to exercise a little caution, especially when you’re caring for an animal. We’re considering this trait A-okay.

As pet owners and an authority on loving animals, we’re taking the stance that it’s simply untrue that if you own a cat, you automatically do not like dogs. If you’re a pet owner, whether it’s a cat, dog, rabbit, horse, or others, you appreciate animals of all kinds.

That same University of Texas study also found that cat people are 11 percent more likely to be open, curious, and creative in comparison to dog people. Add these adjectives together, and they could translate to eccentric — cat lovers, embrace it!

10 Benefits of Being a Cat Person 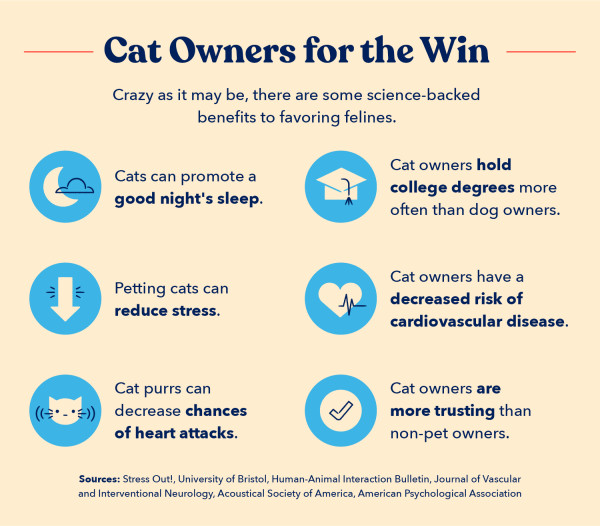 Don’t get us wrong — we adore all animals equally. But these science-backed benefits and survey findings might make even the most loyal of dog lovers feel like the cat’s got their tongue.

So, cat lovers needn’t hide their love of felines. Instead, they should flaunt it proudly, much like some noted celebrities.

Still not convinced being a cat lady is the cat’s meow? Consider these famous fictional characters who helped bring ailurophiles into the limelight along with celebrities who are simply smitten with their kittens — and maybe even reaped the benefits for it.

If you’ve ever seen one of Taylor Swift’s music videos, chances are you’ve seen one of her cats. She has three—Meredith Grey, Olivia Benson, and Benjamin Button—and yes, they’re all named after fictional characters. Olivia and Meredith are Scottish Folds, while Benjamin Button is a Ragdoll Kitty who she adopted on the set of her “Me!” music video.

In addition to making cameos and having tour merchandise created in their honor, Taylor’s cats have also become stars in their own rights. Olivia’s been in a Diet Coke and Keds commercial. And who’s to forget that Taylor herself acted in the movie Cats?

Of The Simpsons fame, Eleanor Abernathy is perhaps the most quintessential “crazy cat lady” of all time. She’s a hoarder whose home — and often person — is overflowing with angry and depressed cats. That she’s fluent in gibberish is supposed to allude to the fact that she’s also crazy, unless she has her medicine.

Interestingly enough, her backstory is quite impressive. She holds a JD from Yale and an MD from Harvard and is even an opera singer, but she burned out fast and by the age of 40 had become a “crazy cat lady.”

If you follow him on Instagram, his affection for furbabies isn’t hard to miss. He celebrates Caturdays and even created his own CATV Mews, whereby he fashioned a cardboard TV onto a cat tree. As if you need more evidence his life revolves around his cats, he also reportedly moved to a bigger apartment to accommodate his kitties.

There’s apparently no clear count on how many cats The Office character Angela Martin has, but it ranges between 12 to 18. At least one, Bandit, we know she stored in the drawer of her feline-festooned desk. She had a nanny cam set up to watch the others at home. She even named her firstborn after one of her cats, Philip. And another, Princess Lady, she purchased for $7,000 after pawning off her engagement ring.

Martha Stewart is an animal lover. She has a menagerie of them, reportedly having owned “at least 20 cats, 25 dogs, 10 chinchillas, and scores of canaries and parakeets… two ponies, three donkeys, 10 horses, many sheep and goats, and hundreds of chickens, geese, turkeys, guinea fowl, quail, peacocks, and homing pigeons.” And that was just in the last 40 years. Turns out an adopted cat named Chiggi was the start of it all. Today, she has at least two Calico Persians that rule the roost of her Bedford, New York farm. Their names are Empress Tang and Princess Peony.

Catwoman is indeed more of a cat lady for her cat-like superpowers versus adoring cats themselves, but we couldn’t leave this fictional character off of our list of iconic cat ladies. Her origin story? She was apparently bitten by a radioactive cat and that gave her some of the cats’ strongest attributes: sneakiness, prowess, agility, and of course the ability to land gracefully — all of which come in handy when you’re swiping jewelry. And while she’s a natural magnet for stray cats, Catwoman apparently owned one herself who’s name was Isis, a black cat.

Known for her leading role in Hulu’s The Handmaid’s Tale and character Peggy in Mad Men, Elisabeth Moss is a recently self-proclaimed cat lady — and quite proud of the two orange tabbies that made her one. She adopted the sisters, Lucy and Ethel, on the set of Listen Up Philip and the trio’s been pretty inseparable ever since. Moss has even been seen touting the cats to the airport and she’s also dressed up Ethel in a handmaid’s getup for Halloween one year.

Yes, pop superstar Katy Perry loves cats. But her “cat lady” persona is born out of the love for one singular feline: her late cat, Kitty Purry. Perry fanatics, or Katy Kats, are probably familiar with the furbaby from seeing her cameos in music videos and also her photos being used as a stage prop on tours. Perry even named not one but two fragrances after Kitty Purry: Meow! and Purr.

The feline herself was nominated for Teen Choice Award for best celebrity pet. The Obama’s dog Bo wound up winning, but there’s no bad blood. Speaking of which, though, it was apparently cats that helped mend Perry and Taylor Swift’s longstanding feud. Perry apparently told Swift she wouldn’t meet up unless she could hold her cat, Benjamin Button. Hey, the best way to a cat lady’s heart… is a cat.

All this to say, long gone are the days of us turning up our noses at cat ladies.

Instead, cat lovers should embrace their traits and feel good doing it.

After all, the benefits far outweigh the stereotypes