What is the DNAffirm DNA Test?

DNAffirm Dog Breed DNA Test kit helps you determine the dog’s breed composition by swabbing its mouth and shipping the sample to a lab.

You’ll find not only what breeds are in your dog’s heritage but also what personality characteristics to expect and the health issues to be aware of.

Does the DNAffirm DNA Test Work?

Each test arrives in a cardboard box with directions about correctly extracting your dog’s DNA and has cheek swabbing tools. Swabbing the dog’s cheek for 20 seconds to a minute is advised for most tests before mailing the sample to the clinic. To avoid cross-contamination, make sure your dog doesn’t feed or drink for two hours prior to the test.

When the samples arrive at the clinic, technicians collect and filter the DNA, and compare it to the DNA in their database. The percentage of each breed your dog’s DNA is matched with is then calculated using a computer algorithm. Instead of viewing it on a webpage, the results are sent to you as a PDF via email.

A frameable certificate, a family tree, a list of characteristics likely to be exhibited by your dog, and a summary of MDR1 and EIC screening outcomes are also included in the PDF. A positive result for MDRI means that your dog is sensitive to some common medications, and a positive result for EIC indicates that your dog is more likely to fail following times of intense exercise. 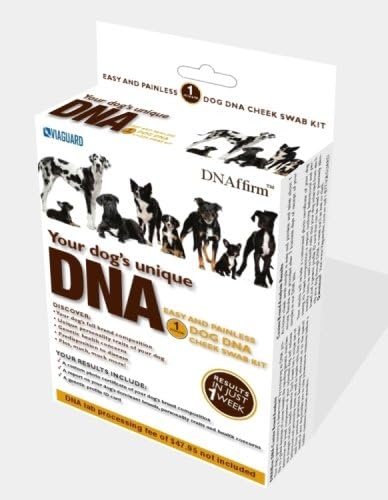 How Accurate is the DNAffirm Test?

The accuracy of DNA testing is highly dependent on the company you choose. The extensiveness of their database also plays a major role. All big dog DNA tests –Embark Dog DNA test, Wisdom Panel, and DNA My Dog Breed– stated that their findings are 95% correct, with some space for human error.

They can also point out health concerns, personality traits, and health risks through their DNA test results irrespective of your canine breed. Their genetic testing is highly accurate and can help pet owners provide health care to their mutts based on their health conditions.

Another factor that may affect the test’s accuracy is the state of your dog’s mouth as you swab it for a sample. The interior of a dog’s mouth typically contains a high concentration of bacteria (especially in rescue dogs), which may cause the sample to deteriorate until the lab you send it to has a chance to run their experiments on it.

This can also provide some sort of error in finding out if your dog has any mutations. Whether you have a Labrador Retriever or a Border Collie, this dog DNA test kit will work with various breeds.

The DNA test kit provides results in a short amount of time, delivering the DNA results within a span of two weeks. Whether you have a purebred dog, a mixed breed, or any different breed, you can expect informative results through this canine DNA test, much to the delight of dog owners.

How Many Breeds Does DNAffirm Test for?

The brand has 72 validated breeds in its database, which is estimated to cover 96% of the mixed breed population in the United States.

If a breed discovered is not in their database, the system attributes it to the most closely related breed or to species farther back in the dog’s lineage.

Get it on Amazon

Your DNAffirm Dog Breed DNA Test kit includes health details about your dog’s genetic makeup, as well as information about his weight, sex, age, and MDR1 and EIC screening findings.

The DNA test kit/Breed Identification test contains two cheek swabs, and a mailing container for you to ship the collected DNA back, and enlists the steps on how to go about the process.

The DNAffirm test kit costs less than $50 on online platforms such as Amazon and provides specific breed details in the form of a PDF.

The details are a little more in-depth, and it also includes two basic health checks. The simple test kit allows you to learn more about your pets’ genetic profiles at home with ease.

How Much Does the DNAffirm Dog Breed DNA Test Kit Cost?

It is the most inexpensive choice in the market. It has a suggested retail price of about $70, although it can be bought for less from Amazon or even Walmart.

Apart from that, you’ll also have to pay for the cost of mailing the package, which should be minimal.

Are DNAffirm DNA Test Kits Worth it?

Yes, the DNAffirm dog breed DNA test is worth it.

The DNAffirm Dog Breed DNA Test kit is a good option if you want to go for something cheaper that would deliver you the information pertaining to your dog’s health as well as his/her ancestry.

If you want to get a better understanding of your dog and keep him disease-free and pain-free for the remainder of his life, we would recommend purchasing this test.