What is Metronidazole for dogs?  Well, the pain and discomfort we experience when we have stomach issues can be intolerable! The same can be said for dogs, which is where Metronidazole comes in.

Vets can look at various clinical signs and provide the pain relief and medication necessary for pets. A popular drug used for stomach pain and diarrhea is Metronidazole for dogs. You can get it on Chewy for 22 cents

Can I Give My Dog Metronidazole?

Yes, you can give your dog Metronidazole. However, you will need a veterinary prescription, and you will have to use the medication following the vet‘s instructions and guidance.

The good news is that Metronidazole is safe for dogs, easy to use, and readily available. Plus, it can be used to manage various conditions but mostly different causes of diarrhea (chronic and acute diarrhea cases).

Get it on Chewy

When to Use Metronidazole for Dogs?

Commonly known by the brand name Flagyl (Metrogel, Protostat), Metronidazole works to restrict the growth and replication of microorganisms. This helps reduce the effect these organisms have on the dog, providing quick relief from the pain and discomfort.

Although it has no direct effect on analgesia, the nature of reducing the number of pathogenic organisms in the animal contributes massively. Metronidazole for dogs is one of the priority drugs for treating the symptoms of inflammatory bowel disease, diarrhea, and Giardia too.

Metronidazole is a versatile antibiotic that can be used for different diseases and health issues in dogs. However, if you are not sure whether this is the right choice for your dog, talk to your trusted vet.

Like the rest of the nitroimidazole derivatives, Metronidazole is effective against some protozoa, anaerobic bacteria, and certain parasites. It is a commonly used anti-diarrheal to treat inflammation of the large intestine.

Another large contribution to the popularity of Flagyl is the ability to treat Giardia in dogs and cats. Giardia is caused by a protozoan parasite that destroys intestinal cells. This leads to diarrhea, loss of appetite, vomiting, abdominal pain, and fever.

Metronidazole can penetrate bone and teeth. So, for the likes of periodontal disease and oral infection, metronidazole therapy is adequate treatment. Other general bacterial infections causing diarrhea or sepsis are typically treatable with a Metronidazole injection.

Benefits and Uses of Metronidazole for Dogs

Metronidazole for dogs directly affects the DNA of the microorganism. To be more precise, it penetrates the organism and destroys the DNA. It is effective against certain protozoal infections, as well as anaerobic bacterial infections.

These include the likes of Giardia, Trichomonas, and Balantidium coli, all very capable of causing inflammatory bowel disease. The anti-inflammatory effect it has in the gastrointestinal tract is thought to be due to the ability to cause immunosuppression.

The immunosuppression seen with Flagyl is only a small part, so not enough to make the animal vulnerable to secondary infection. This is particularly important as with most medicines, immunosuppression is considered to be a severe side effect.

Metronidazole can also cross the blood-brain barrier. So, unlike a lot of antibiotics, Metronidazole can have an effect on anaerobic bacteria invading the central nervous system. So conditions such as peripheral neuropathy in dogs, and bacterial infections in the brain, can receive reliable medication.

Last but not least, Flagyl can also penetrate bone. Once again, there are not many antibiotics capable of doing this. The ability to penetrate bones means dental complications and bone infections can be managed with this simple yet potent antibiotic option.

Potential Side Effects and Risks of Metronidazole for Dogs

Same as any other drug, Metronidazole can cause side effects in dogs. The most common side effects include nausea, vomiting, and diarrhea. Drooling, blood in the urine and appetite loss are also possible but not as common. If these side effects appear, the vet will prescribe medications for their management.

Plus, the ability of Metronidazole to cross the blood-brain barrier means there is a higher chance of neurological side effects. They can range from mild depression, head tilts, and loss of balance to seizures, lack of coordination, and paralysis in all four legs.

Though paralysis of the legs in dogs is rare, because of the severity, it is definitely worth mentioning. Slight depression and stiffness are also quite common when using Flagyl, however, they are not something to be particularly worried about.

In rare instances, Metronidazole use has been shown to cause pancreatitis in dogs. Prolonged use of this antibiotic can lead to the development of acute pancreatitis (and sometimes chronic pancreatitis) in dogs, which can have a domino effect on further gut health.

Finally, we should note that some dogs can be allergic to this antibiotic. Most allergic reactions manifest with hives and rashes. however, in more severe cases, they can trigger swelling of the airways and cause difficulty breathing. This form of allergic reaction is called anaphylactic shock and is considered a medical emergency.

When using Metronidazole, it is vital to get the right dose. Dogs usually need between 5-20 mg per kg of body weight. Luckily, the Metronidazole tablets are easy to break, thus allowing precise dosing.

When prescribing Metronidazole, veterinarians warn about the consequences of overdoses. Metronidazole toxicity is possible and usually manifests with vomiting, nausea, and dizziness. In more severe cases, there can be neurological symptoms as well. A dog overdosed on Metronidazole requires urgent veterinary attention.

Since Metronidazole has a repelling, bitter taste, it is not advisable to crush the tablet and mix it with the dog’s food. Instead, it would be best if you used a pill pocket or put the tablet directly into your dog’s mouth, at the base of the tongue.

Keep in mind that Metronidazole starts working 1 to 2 hours after administration. Because of its short-acting nature, its effects wear off within the following 24 hours.

Just to be on the safe side and decrease the risk for unwanted side effects, Metronidazole should not be used in young puppies, pregnant, and nursing dogs.

The antibiotic should also be avoided in dogs with debilitated overall health, for example, dogs with advanced kidney disease. The same applies to dogs with seizure disorders and severe neutropenia (low white blood cell numbers).

Metronidazole must be used with extra caution in dogs with liver diseases and dogs that have recently suffered from anticoagulant poisoning.

While on the topic, we should emphasize the fact that drug interactions are possible when using Metronidazole. The antibiotic interacts with many medications, including gastro-protectants (cimetidine), blood thinners (warfarin), phenobarbital, phenytoin, cyclosporine, and certain chemotherapy drugs.

When using Metronidazole or any other antibiotic, it is advisable to use probiotics. This is because prolonged antibiotic usage disrupts the gut’s microbiome and leads to imbalances. Probiotic supplements will ensure the microbiome stays in balance. Luckily, the modern market offers an array of probiotic products formulated specifically for dogs.

If you are looking for an alternative for dogs that doesn’t require a prescription, you can give your dog Vets Preferred Advanced Anti-Diarrhea for Dogs. The a fast acting absorbent action helps alleviate the irritation, discomfort, and cramping associated with dog diarrhea within 2-3 days. For dogs up to 15 pounds, use one teaspoon. Dogs 16-50 pounds can use two teaspoons, and for dogs over 51 pounds use three teaspoons. 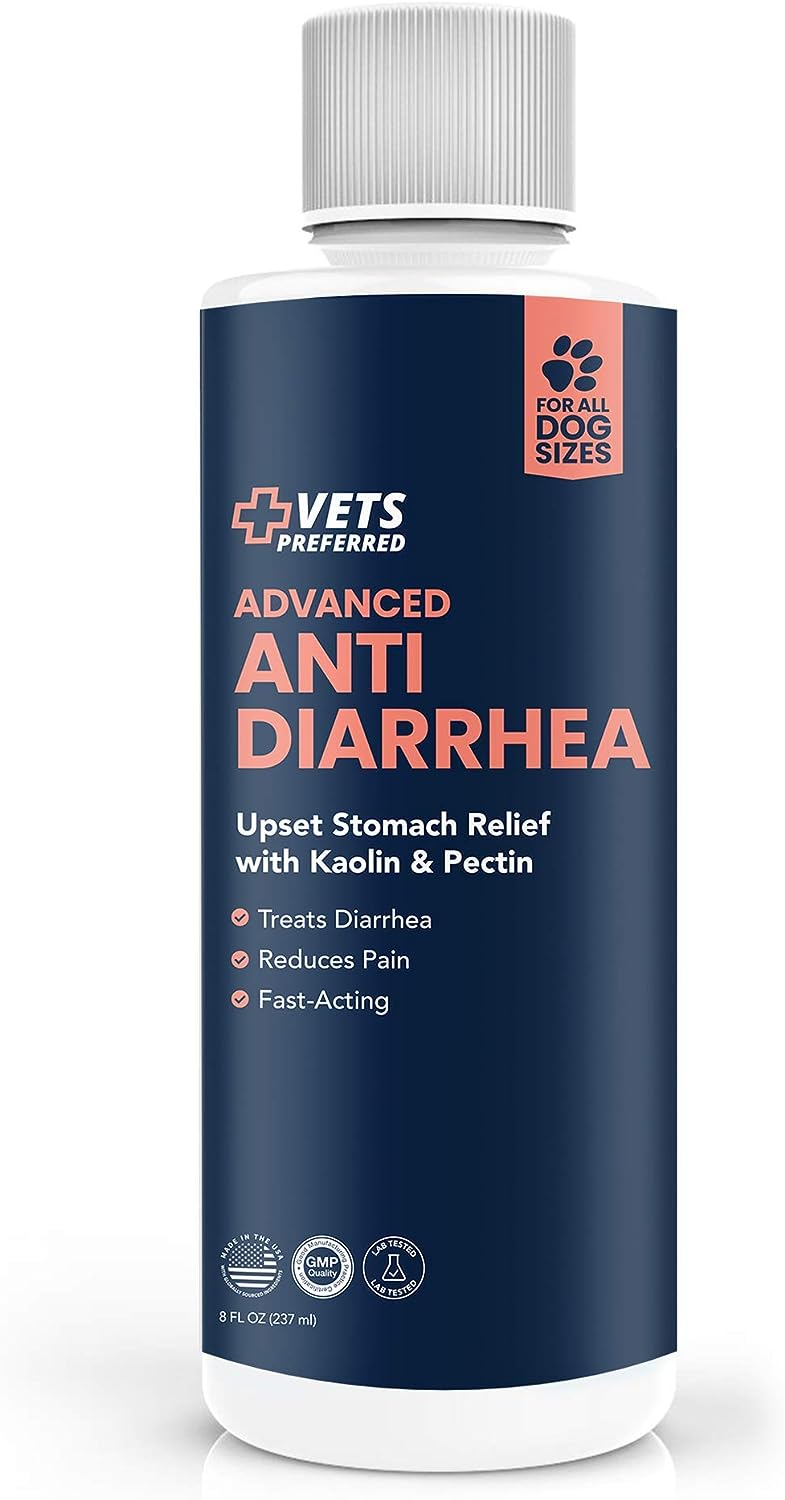 If your dog is suffering from diarrhea, a quick and effective way to soothe their stomach and restore gut health is with Vets Preferred Advanced Anti Diarrhea

Our Final Thoughts on Metronidazole for Dogs

In addition to being safe, Metronidazole used for diarrhea and other conditions is efficient. As a matter of fact, dog Metronidazole is versatile and can be used to fight off various infections and conditions.

However, every dog is different, and every situation requires a different approach. In those terms, keep in mind that this article is purely informative and should not be used as a substitute for visiting the vet and requiring a professional opinion.