A Pet Owners Guide to Pancreatic Cancer in Dogs: Causes, Symptoms, and Treatment

What is Pancreatic Cancer in Dogs?

Pancreatic cancer in dogs is a tumor that develops due to the abnormal growth of cells in the dog’s pancreas.

The pancreas is a vital organ located near the start of the small intestines. The pancreas has two types of cells grouped according to their function: endocrine cells and exocrine cells.

Pancreatic cancer in dogs is rare, but when it occurs, it is very aggressive due to its high rate of metastasis. Pancreatic neoplasms tend to spread to other tissues and organs such as the regional lymph nodes, liver, small intestines, bones, and lungs.

Types of Pancreatic Cancer in Dogs

There are different types of pancreatic cancer in dogs. Some pancreatic tumors are benign, and others are malignant.

Insulinomas. This type of pancreatic cancer starts in the insulin-producing cells of the pancreas. Insulin is an essential hormone that controls glucose (blood sugar) levels. Without insulin, blood sugar would shoot up after meals to life-threatening levels (similar to what occurs in dogs with diabetes mellitus). Too much insulin causes hypoglycemia which is also dangerous.

Is Pancreatic Tumors in Dogs Painful?

Yes, pancreatic cancer in dogs can be excruciating, especially in the later stages. Benign pancreatic tumors are less likely to cause pain, but they are sporadic in dogs.

Malignant pancreatic tumors, on the other hand, often cause pain. Even if the tumor is not painful on its own, its secondary effects can cause pain.

For example, pancreatic cancer can spread to the bones and cause pain in the limbs during movement. Fluid buildup in the pancreas or liver can cause abdominal pain.

What Causes Pancreatic Adenocarcinoma in Dogs?

What are the Symptoms of Pancreatic Cancer in Dogs?

The clinical signs of pancreatic cancer depend on the type. High insulin levels and very low blood sugar levels (hypoglycemia) are often seen in insulinomas. In such cases, dogs show:

For adenocarcinomas, the signs and symptoms are nonspecific until the later stages when pancreatitis (inflammation of the pancreas) becomes severe. The signs include:

Pancreatic cancer in dogs often triggers digestive issues, such as diarrhea and vomiting due to low levels of digestive enzymes. The condition can evolve into exocrine pancreatic insufficiency (EPI).

As pancreatic cancer in dogs spreads, abnormalities may occur in other organs; for example:

If your dog is showing some of these symptoms, call the vet and book an appointment. The sooner you catch the disease, the better the outcome.

The diagnosis of pancreatic cancer in dogs starts with a thorough physical examination. If the vet suspects pancreatic cancer, they will order blood tests to check for signs of damage to the pancreas, such as low blood sugar levels and high insulin levels.

The vet may also perform an ultrasound-guided fine-needle aspiration or biopsy where they collect cells from the pancreas. In both cases, the collected sample is analyzed under a microscope (in veterinary medicine, this is called either cytology or histology, depending on the type of sample).

If these tests show cancerous cells and the diagnosis is confirmed, the vet will order additional tests for tumor staging and evaluating the dog’s overall health. Such tests include urinalysis, blood work, chest x-rays or radiographs, abdominal ultrasounds, and CT scans.

How do You Treat Pancreatic Cancer in Dogs?

Surgery. For insulinomas, partial removal of the pancreas (partial pancreatectomy) may be performed to remove the pancreatic mass. Some dogs with adenocarcinomas qualify for a similar procedure, but it is more aggressive as the whole pancreas (total pancreatectomy), and portions of the stomach and the duodenum (start of the small intestines) may have to be removed.

As a dog owner, your role is to make your dog as comfortable as possible. Ask your vet what holistic options are best for your dog. Available options include diet, pet CBD supplements, acupuncture, physiotherapy, and herbs.

Diet. The right diet is vital for dogs with pancreatic cancer, especially those with insulinoma (they need frequent meals to maintain steady blood sugar levels). Small meals may be more suitable for dogs with adenocarcinoma, as their digestive function is compromised. It is best to see a veterinary nutritionist for a diet plan for your dog.

Cannabidiol (CBD) Products. You can make use of the anti-inflammatory and anti-anxiety properties of CBD to improve your dog’s well-being. For CBD that is safe and effective, try the Honest Paws CBD Relief Collection. 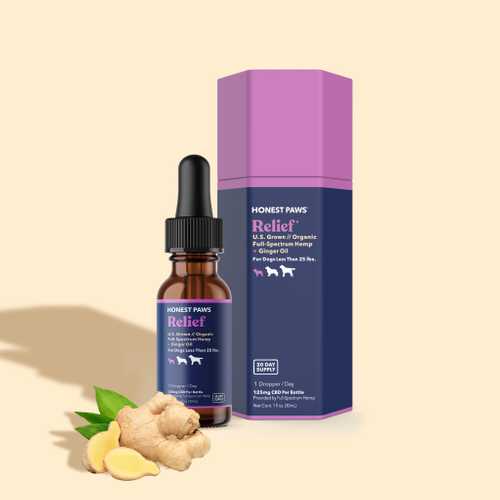 What can I do to Prevent Pancreatic Adenocarcinoma in Dogs?

The question of how to prevent cancer in dogs has no definitive answer. You can lower the risk of pancreatic cancer in dogs by providing a healthy diet, regular physical exercise, using pet-safe products, and protecting their mental well-being.

In the event your dog develops pancreatic cancer, providing the best treatment is important. The expenses of cancer treatment add up quickly (for example, partial pancreatectomy can cost up to $6000).

You can prepare yourself for such situations by signing up for OneVet’s insurance package. For only $19.99, you get 24/7 access to a licensed veterinarian, a $3000 emergency fund, and coverage for all pre-existing conditions.

Is Pancreatic Cancer in Dogs Treatable?

Yes, pancreatic cancer in dogs is manageable, but only if caught early and treated promptly. In practice, the disease has a very poor prognosis because it has usually already metastasized at the time of diagnosis.